I have visited the Holy Island of Lindisfarne many times to admire the sites birdlife, chase rarities and even seek out insects, but never to appreciate it’s diverse and interesting flora.

Lindisfarne is well known as an excellent site for those interested in botany, it’s unspoilt beaches, sprawling dune slacks, fields and expansive areas of saltmarsh reminiscent of a time before man altered Britain’s coastal habitats beyond recognition. Home to many intriguing and, in some cases, scarce species, the botanical community here is diverse enough to keep visitors enthralled for hours. As it did us on overdue visit this week.

Brace yourselves, this could be a long one…

Arriving on Lindisfarne and heading first for the quiet reaches of The Snook, we set off in search of the islands most sought after plant species: the Lindisfarne Helleborine. First discovered on Holy Island in 1958, this understated but beautiful orchid is endemic here and in July, blooms in small numbers across the Western tip of the island.

During a half-hour search of the Snook, we were able to locate just a single orchid. Stumbling across the delicate, green and white flower atop a small mound where it grew conspicuously amongst the Marram. Perhaps a little muted, at least compared to the island’s larger, showier orchids, but a pleasure to behold nevertheless. 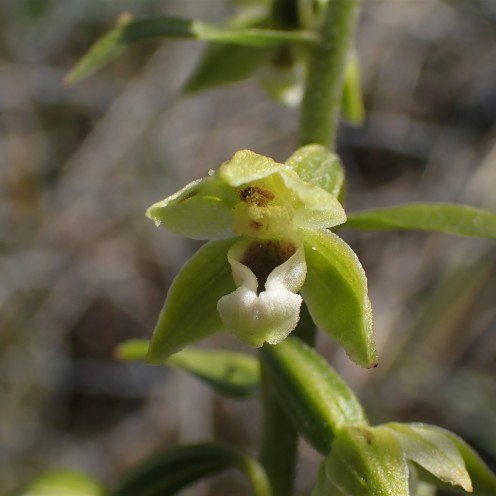 Moving on to investigate the nearby dune slacks, it seemed we had timed our visit perfectly to coincide with the emergence of another, arguably more appealing orchid: the Marsh Helleborine. Blooming in their hundreds right across the Western tip of the island, these orchids made for quite the sight – purplish flowers contrasting with the suppressed tones of many other Helleborines, and boasting an exceedingly frilly ‘lip’. These locally abundant flowers are by all accounts a real beauty. 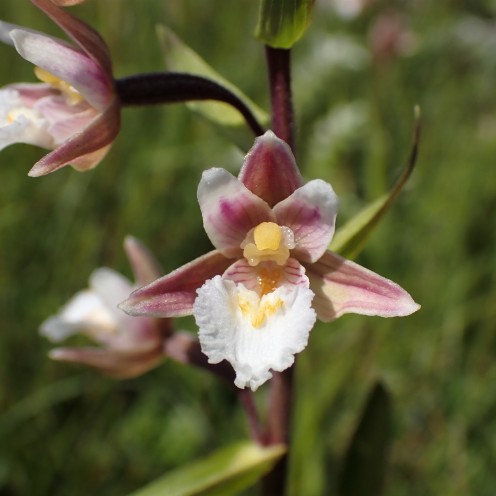 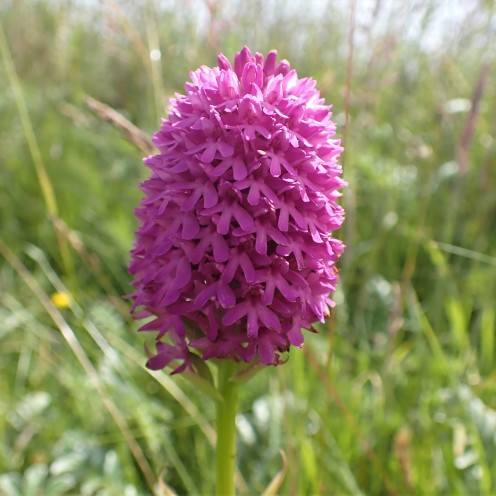 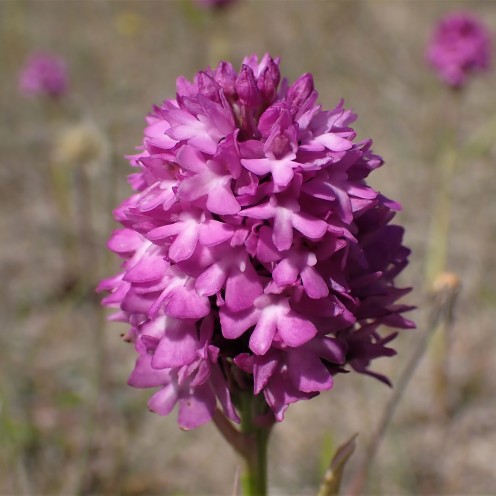 Orchids are special but by no means are the be-all and end-all of the trip to Lindisfarne, and during our stay, many other interesting species were to be found. None more so than a single specimen of Scots Lovage found nestled in a sheltered area of the dunes. An Arctic plant, Northumberland marks the most Southerly limit of its UK range and records from Lindisfarne have been few and far between since 1985.

Here too, the succulent stalks of Sea Sandwort protruded from the bare sand, reminiscent of something you would find in the houseplant section of your local garden centre. 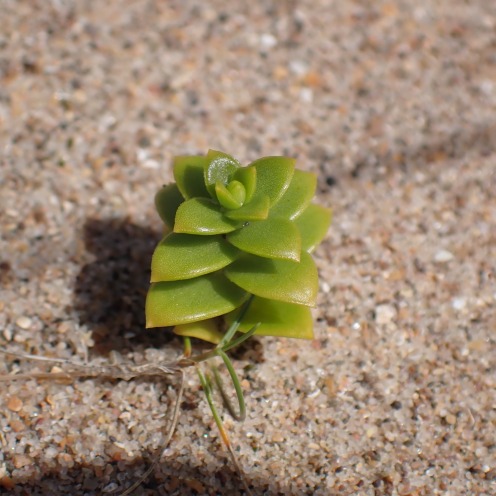 Back in the dune slacks and we were delighted to encounter the deep-pink flowers of Seaside Centaury; whilst a low-growing purple flower turned out to be Purple Milk-vetch, another first for this amateur botanist. I confess, I almost mistook it for one of the countless Self-heal flowers showing en masse here…

Common Valarian and Tansy were observed here too and the wetter areas were flush with the delicate yellow flowers of Lesser Spearwort and the curious, circular leaves of Marsh Pennywort. 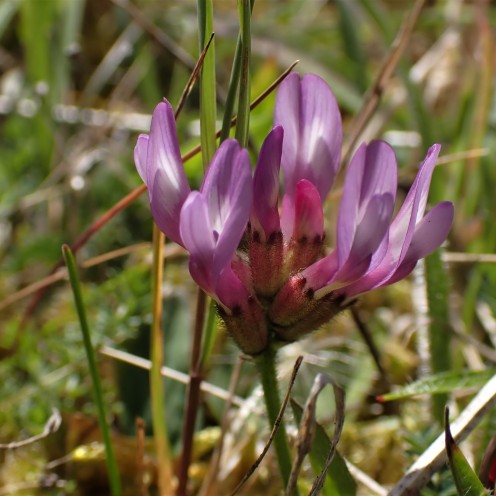 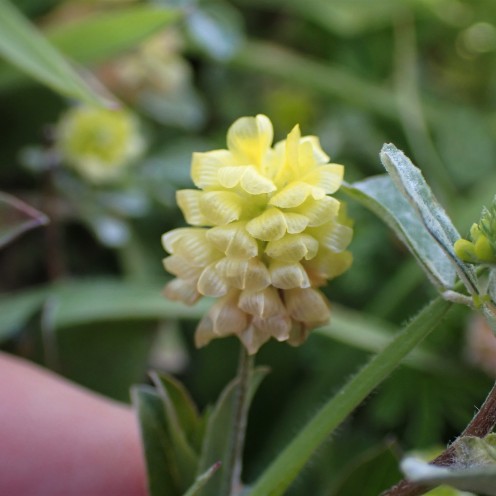 Departing the Western reaches of Lindisfarne, we headed East to the village. Passing through, it was difficult not to appreciate the plant diversity present in the high garden walls – old stone painted a wonderful mix of greens by the fronds of countless ferns. Here, we found a good range of common species, including Wall-rue, Maidenhair Spleenwort and Polypody; while it was nice to see both Biting and White Stonecrop in bloom. The island’s abundant Wallflowers had gone over, now displaying a glut of pea-like seed pods. 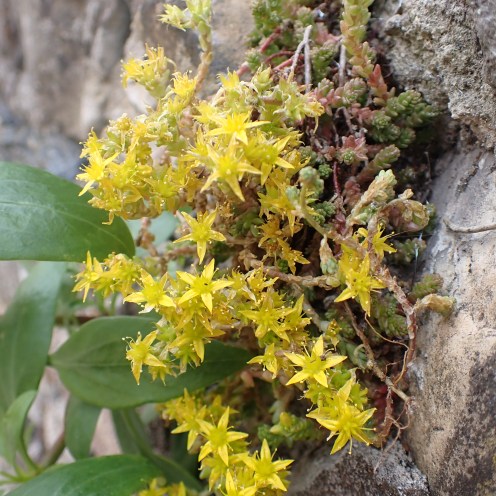 Departing the thronging village streets, a long walk around the Eastern side of the island ensued, taking in the iconic castle en route. In the vicinity of the castle, we stumbled across a nice clump of blooming Harebell alongside Thrift and a pretty example of what I think could be Dwarf Mallow – far daintier than its hulking cousin found growing here too. The castle walls were draped in an impressive display of Red Valarian and both Sea and Buck’s-horn Plantain were noted. 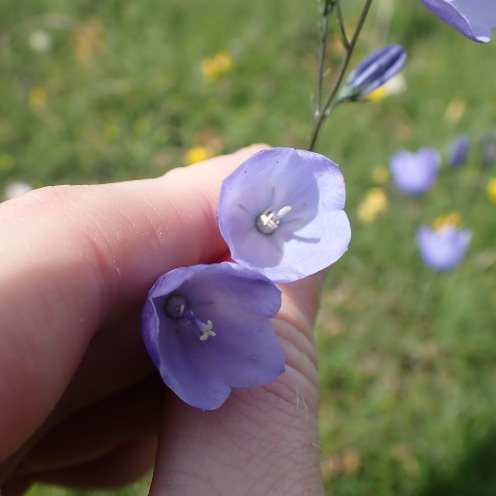 Attempting to curtail this particular botanical tale, towards the North Shore of the island highlights included large expanses of Wild Thyme and Common Cottongrass, as well as what I think could have been Slender Thistle (I really must practice my thistles). Grassier areas proved productive too with an impressive display of Meadow Vetchling interspersed with the pink blooms of Red Bartsia and, in select places, the familiar flowers of Field Scabious. Finally, the buried remnants of an old wall held Carline Thistle – a species I have seen further afield but never before in my native Northumberland.

Of course, no trip to Lindisfarne would be complete absent an encounter with the omnipresent Pirri-Pirri-bur which blights the island. Originating from Australia, this tenacious invader was observed right across the site; though only twice did I fall foul of its hooked burs. Controlling this species presents many problems and it seems unlikely that it will be going anywhere anytime soon, despite the best efforts of those who manage the reserve. 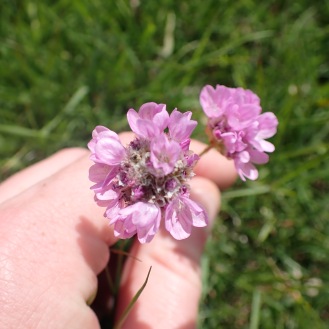 Of course, where there are wildflowers, there will also be pollinators and it would be rude not to cast the spotlight on a few of the insects observed throughout the day. In particular, this superb Dark-green Fritillary which delighted as it nectared from the blooms of Creeping Thistle. Other butterflies observed include many Small Heath, Ringlet, Meadow Brown and Common Blue, alongside smaller numbers of Small Tortoiseshell, Red Admiral and Large White.