A Special Site of Scientific Interest (SSSI) and Durham Wildlife Trust nature reserve encompassing a disused magnesian limestone quarry, I have read about Bishop Middleham Quarry for years. People, it seems, visit the site from far and wide to experience the fantastic flora on offer here. As well as for an abundance of colourful insects.

It is the bedrock here that gives the site such appeal. The quarry itself ceased work in 1934 and was left to restore naturally, providing a rare opportunity for magnesian limestone plant species to colonise and stay put. The quarry holds a number of quite rare species, restricted by the scarcity of limestone habitats in the wider countryside, but rarity aside, provides an opportunity to marvel at a vibrant community of plants, insects and other wildlife. It really is a fantastic site.

Arriving at the site with orchids on the brain, it wasn’t long before we encountered our first. Scattered across the upper-tier of the quarry grassland, Common Spotted Orchids bloomed in their dozens – tall spikes of alternating shades of pink, purple and white looking lovely amid swaying stems of Quaking Grass and the blooms of Restharrow, Common Rock Rose and Bird’s-foot Trefoil.

Here, we stumbled across a beautiful, pure white specimen – the alba variant of this common species?

Scattered among the paler blooms of the spotted orchids, the deep-purple flowers of Northern Marsh Orchid were easy to make out. Less numerous, by far, but nice to see. Perhaps more exciting, however, was a single flower of Pyramidal Orchid found only metres into the reserve. A new species for me, a joy to behold and the first of many seen throughout our visit. 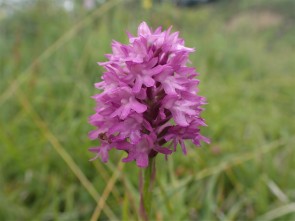 Still only metres from the reserve entrance, we soon encountered the day’s target species: Dark-red Helleborine. Bishop Middleham Quarry is known as the best place in the UK to observe this limestone-loving orchid and, sure enough, we encountered hundreds during our stay. Perhaps we were a little early as many had yet to open; though some pioneering plants were in full bloom. Thankfully! 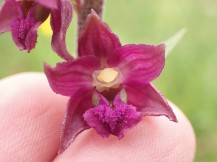 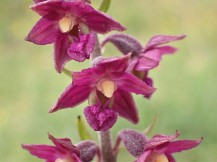 Prying ourselves away from the helleborines, it was not long before we stumbled across two new orchids. On the quarry floor, the egg-shaped leaves and fading flower spikes of Common Twayblade were immediately apparent – not exactly striking by orchid standards but nice to see. Here too, a few Fragrant Orchids were found, another first for me and definitely deserving of a sniff to test their validity. The verdict? They did smell rather nice!

The least abundant orchids on-site were Bee Orchids but, having been pointed in the direction of a particular slope by a kind passer-by, we soon found three spikes in full flower. A plant that warrants little exposition and never fails to earn a smile. Here too, more Pyramidal Orchids were found. 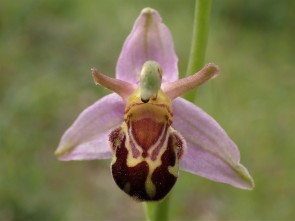 As someone with very much limited knowledge of plants, Bishop Middleham Quarry also provided an opportunity to get to grips with a number of less-specialist species I seldom encounter around my usual haunts. It was nice to be able to compare Small and Field Scabious found growing side-by-side in a more verdant area of the site; while a tall yellow flower could well have been Agrimony.  Perforate St. John’s-wort was numerous but we failed to find (or at least, identify) the scarcer Pale St. John’s-wort which is said to grow here. A fine reason for another visit, I think.

Whilst trying (and failing) to locate Moonwort, I was pleased to stumble across a single flowering Harebell; while the strange, pea-like stalks of what I think was Yellow-wort were found on an old spoil heap. Other species observed included Wild Thyme, Greater Knapweed, Mouse-ear Hawkweed, Red Valarian and Wild Strawberry. 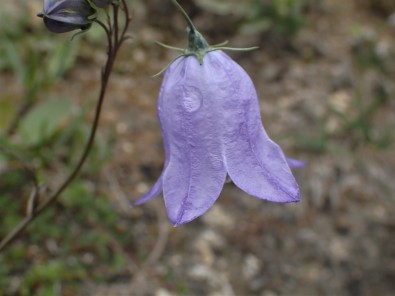 Whilst many of our walks focus on plantlife these days (I’m not sure what has happened to me, in truth) we did find the time to admire some of the insect life present on site. Butterflies were incredibly numerous with plenty of Ringlet and Meadow Brown seen, alongside smaller numbers of Small Skipper, Common Blue, Speckled Wood, Small Heath and Small Tortoiseshell. Moths on the wing included Six-spot Burnet, Latticed Heath and Shaded Broad-bar.

A brief scan of the plentiful Hogweed tops on site revealed a few common hoverflies including Heliphilus pendulus, Volucella pellucens and Marmalade Hoverfly. Here too a grasshopper was apprehended (with great difficulty) and tentatively identified as Common Green Grasshopper owing to the in incurved, cream-coloured line on its shoulder.

None of the sites famous Northern Brown Argus were seen on this occasion but, with countless other items of interest observed, a fantastic day was had.

Bishop Middleham Quarry is an exceptional, altogether beautiful site. A fine testament to what can happen when sites exploited by humans are returned to nature. I will definitely be visiting the site again in the future, even if it does involve more frequent trips (dare I say it) south of the Tyne!