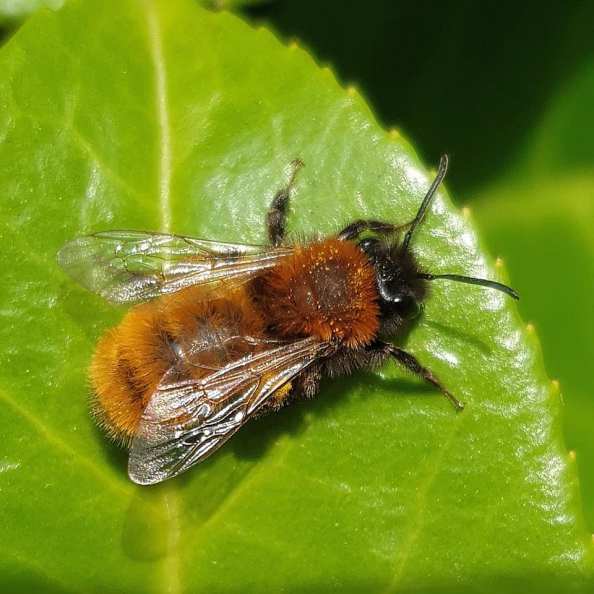 For me, one of the few positive aspects of our current lockdown has been the opportunity to look closer at the wildlife that persists close to home. Doing so has been eyeopening, to say the least, and while of course, I would rather have been venturing into the wider countryside, the diversity of life here has both surprised and delighted.

One of the most obvious species groups on our street of late has been the bees. Spurred on by the North East Bee Hunt, an ongoing citizen science scheme led by the Natural History Society of Northumbria, I have been paying an increasing amount of attention to these vitally important invertebrates over recent weeks – with great results. As of writing this, we have now recorded 14 species of bee on our street!

Where better to start than with bumblebees? The first queens appeared here in March providing a good opportunity to appreciate the emerging ladies in all of their fluffy, bumbling glory; while now, workers have begun to appear. Of these, Buff-tailed Bumblebee, Tree Bumblebee, and Common Carder Bee have been the most conspicuous, congregating en masse in the weed-filled yards that dominate on our street. More interesting still were sightings of Small Garden Bumblebee and Early Bumblebee – both new species for the every-growing ‘street list‘.

Topping off our haul of Britain’s larger, more trendy bees, on a few occasions now we have caught sight of striking cuckoo bumblebee patrolling the length of hedge that fringes the nearby railway line. Sporting an eye-catching combination of a black body and white abdomen (okay, bum) this was either a Southern Cuckoo Bumblebee or Gypsy’s Cuckoo Bumblebee. Frustratingly, the pair are almost indistinguishable and I think I’ll have to make do with a question mark next to this record.

I confess that until recently, I had paid little attention to solitary bees, beliving them small, difficult to identify, and perhaps, a little less interesting than our bumblebees. Oh, how wrong I was – these little engineers are fascinating to watch and just as vivid as their larger, more rotund kin.

One of the most abundant solitary bees observed of late has been the fox-coloured Tawny Mining Bee. A colony of which appears to be flourishing on the outskirts of the local allotments with the larger, ginger females favouring a patch of Cherry Laurel to bask each day as the sun warms up. One of our most recognisable solitary bees, this species is known to favour gardens, parks, and other artificial habitats thus its little wonder we have found them here. 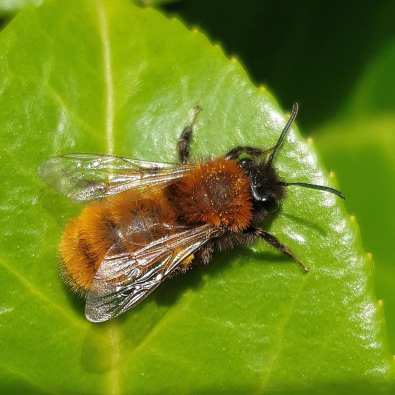 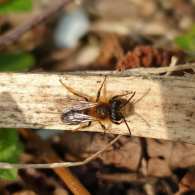 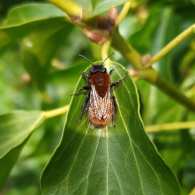 Slightly less easy to identify, the former species appears to be sharing it’s a particular stretch of hedgerow with another species: the Chocolate Mining Bee. A new species for me, this large bee has a distinct Honeybee vibe about it but boasts characteristic white hairs on the underside of its hind legs. At first glance, this bee looks incredibly similar to another species, the Buffish Mining Bee, although, under scrutiny, the latter species displays an orange-colored pollen brush on its back lets. 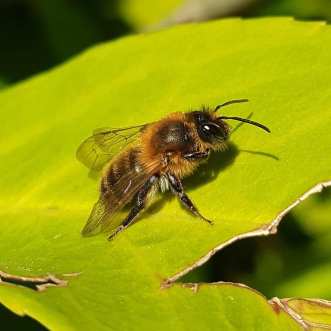 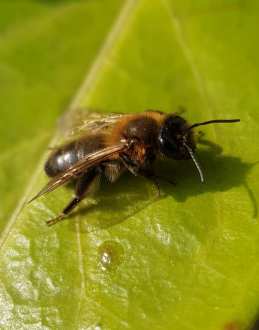 At first glance, Buffish Mining Bees appear somewhat scarcer here and annoyingly, the only one I managed to photograph was covered in pollen, making recognition of those orange pollen brushes impossible.

Familiar from bee boxes and wall cavities across the nation, the Red Mason Bee is another species we have noticed a lot recently. Boasting a beautiful mix of flame-orange and black, these bees have quickly become a regular fixture of our daily walks with the larger, some may say more appealing, females gathering in good numbers on the muddy shores of our local pond. Here they gather all-important mud used for lining their nest cells as shown in the video below – what a treat.

At the risk of waffling on too long about bees, I will skip over Early Mining Bees. What does warrant a mention however are colourful but confusing Nomada cuckoo bees that have become increasingly prevalent over recent weeks. Like the Cuckoo Bumblebees, these wasp-like bees are nest parasites – they lay their eggs in the nests of solitary bees, with most species of Nomad Bee favouring a particular species.

These blighters are notoriously hard to identify; particularly the tri-colored individuals shown in the photos below. They could be Panzer’s Nomad Bee but alas, this is another instance where I may well have to settle for appreciating the bee absent delving into identification. We did, however, with some expert help from Charlotte Rankin (aka @bumble_being) manage to identify a single Gooden’s Nomad Bee – a known parasite of Buffish Mining Bee. 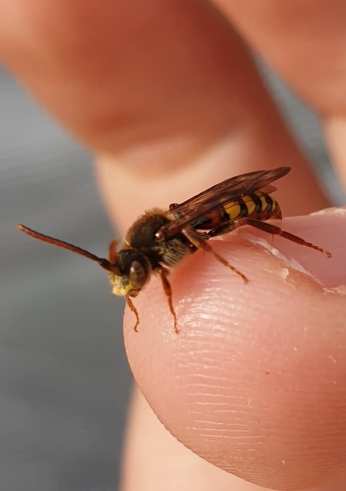 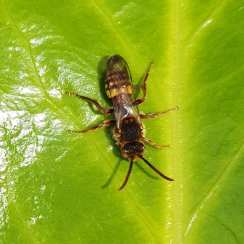 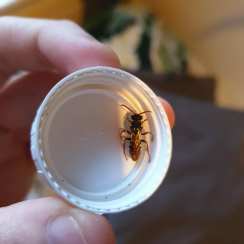 If you cannot tell already, I definitely have bees on the brain at the moment. Little wonder really given how fascinating these important little insects are. I will curtail this blog post there and save a further bee-themed announcement for a future blog post.

If, like me, you live in the North East of England, please consider sharing your bee sightings as part of the North East Bee Hunt. Your records can help plug the gaps in our knowledge and ensure those working to protect bees are equipped with greater knowledge going forward.