A recap of week 6 of #365DaysofBotany now with a further seven wild plants unearthed (figuratively speaking) around the local area. Befitting of my urban location, some of these are non-native, their colonisation of the cityscape aided by the actions of man, while others you will surely recognise as more typically ‘British’. 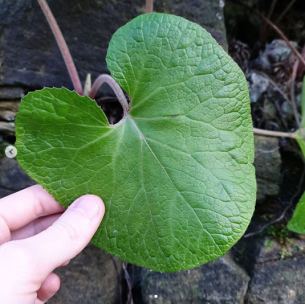 Another new plant species for me (I must have been pretty unobservant, until now) and another introduced species. A plant superficially similar to our native Butterbur and Colt’s-foot, at least in terms of foliage, P. pyrenaicus is, in fact, native to the Mediterranean. It was introduced to Britain in 1806 and, by 1835, had become naturalised in the wild.

The leaves of this species are large, stalked and boast small regular teeth; while its flowers, borne on tall stems are pinkish in colour and often appear in the depths of winter. When present, you are likely to observe this species growing in large, sprawling patches. This is due to the tendency of heliotrope to spread via underground rhizomes.

Fun fact: the blooms of this plant give off a delightful vanilla scent – worth a sniff if ever you find the time.

A plant of many intriguing names including Cuckoo-pint and Jack in the Pulpit, the leaves of A.maculatum appear in spring, forming dense tufts on the forest floor. The flowers appear a little later and are borne on a spear-shaped spadix surrounded by a pale-green, leaf-like hood. These are similar to a great many aroids and closely resemble those of household anthurium and philodendron.

Arum flowers sport a ring of hairs which serve to trap flying insects, particularly Owl-Midges, attracted to the flower by its unpleasant, faecal odour and a temperature up to 15°C warmer than the air around it. Once trapped, visiting insects are dusted with pollen before escaping and transferring their load to female flowers elsewhere. For more facts about Lords and Ladies, see here.

Fun fact: the Victorians were not fond of the sexual connotations associated with A. maculatum and tried to promulgate the name Our Lord and Our Lady in its place

A familiar ‘weed’ of gardens, stonework and rocky places, this species is native to the Alps in Southern Europe. The leaves of P. lutea are much divided and pale green in colour; while the flowers (which can be seen year-round) are yellow and trumpet-shaped.

Fun fact: the genus name comes from the Greek word korydalis, meaning lark. This is thought to be due to the resemblance of the plant’s floral spurs to the spurs of some larks. 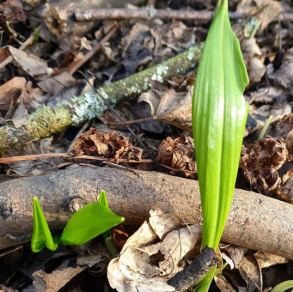 An abundant (and tasty) wildflower synonymous with the British spring, A. ursinum is easy to come by in many woodlands where it forms dense, heavily-scented swaths as hundreds of bulbs burst upwards as the weather warms. The star-like, white flowers of Ramsons are borne in clusters atop tall stems.

The leaves of this plant are loosely similar to a number of toxic species, including Lily-of-the-Valley and Lords and Ladies; though they can be easily identified by the pungent garlic smell given off when crushed.

Fun fact: cows that have fed on ramsons give milk that tastes slightly of garlic, and butter made from this milk was once very popular in Switzerland. 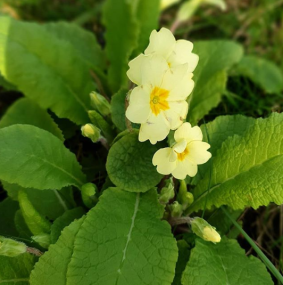 The wild ancestor of the garish primroses you see adorning the shelves in garden centres. A low-growing perennial sporting a rosette of wrinkled, toothed leaves, P. vulgaris is without fail one of the first wild plants to bloom each year. Indeed, its scientific name, Primula, alludes to this early nature.

The flowers of this species are typically pale yellow, although pink and white versions can be encountered in natural settings. Where conditions are right, these blooms can be seen to cover the ground in shaded woodlands and under hedgerows, making this a delightful sight early in the year when colour is hard to come by.

Fun fact: this species was voted the county flower of Devon in 2002 during a survey by conservation charity, Plantlife.

Native across a broad stretch of Eurasia, from the UK to Pakistan, A. peiolata goes by many local names including Jack-by-the-Hedge (a personal favourite of mine). This plant is biennial, meaning it flowers only in its second year and its year one, shows only as a clump of rounded, slightly wrinkled leaves that when crushed emit a distinct, garlic smell. It produces its clustered, white flowers the following Spring.

Sixty-nine insect species are closely associated with A. petiolata in Europe, including the familiar Garden Carpet Moth whose larvae feed on the foliage. Likewise, this is one foodplant of the Orange-tip Butterfly – a familiar herald of Spring in the UK.

Fun fact: Garlic mustard is one of the oldest spices used in Europe, with evidence of its culinary use dating back as far as 4175 BC.

A new species for me as part of this challenge, G. quadriradiata is a non-native species in the UK. Its natural range is thought to be Central Mexico, although it has since across the globe to Europe, Japan, North America, India and many other nations. A successful species indeed!

An annual herb boasting pairs of ovate, hairy leaves, its flowers are somewhat daisy-like in appearance – explaining the species alternative name of Peruvian Daisy. These flowers typically appear from May to October and are frequently encountered in urban areas, particularly where the ground has been disturbed.

Fun fact: this species is edible in China, is regularly used in salads or as a potherb.