This year’s exercise in botanical appreciation continues with a flurry of species observed predominately in urban areas. Once again, non-native species dominate proceedings, a fact which is perhaps representative of the floral make-up of Britain’s urban realm.

The sight of verdant, green honeysuckle leaves beginning to unfurl along whispy, winding stems is a joy to behold, and a good indicator that spring is well and truly on its way.

Native to a broad swath of Eurasia, from Scandinavia in the North, to North Africa in the South L. periclymenum needs little introduction – it’s flowers familiar to many who regularly walk in British woodlands.

Fun fact: this species hosts a species of leaf-miner, Chromatomyia aprilina, which leaves distinct tunnels on the mature leaves of the plant. 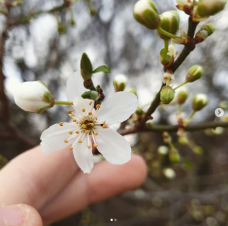 A naturalised species in the British Isles, the pearly blooms of P. cerasifera are sight synonymous with Spring. Native to Southern Europe and Western Asia, when in bloom, this species closely resembles our native Blackthorn but can be separated by the reflexed sepals flanking each flower. The sepals on Blackthorn are patent.

This species is widely distributed around Britain and can commonly be found in urban areas where it is regularly planted for its ornamental value. Look out too for pink and purple flowering variants.

Fun fact: another way to separate this species from Blackthorn is by looking at the new growth. First-year growth on Cherry Plum is green, while on Blackthorn, twigs are brown and slightly hairy.

An oddity for Day 31 of 365 Days of Botany with an unusual, tropical-looking succulent growing in a quaint Northumbrian town.

Native to Southern Europe, this species is most commonly encountered as an escape from cultivation, often on old walls and amid stonework. A mat-forming plant boasting distinct clusters of fleshy rosettes, it seldom naturalises in the wider environment and is more often noted as an abnormality, clinging on in urban areas.

Fun fact: lore states that planting S. tectorum on the roof of your house will ward off both witches and lightning strikes. I might try this…

A familiar garden perennial covered head to toe in silky, silver hairs, this species is native to Turkey, Iran and Armenia. Planted widely for its woolly appeal, it readily escapes from cultivation and can be found widely across Britain where it produces erect spikes of whorled pink flowers, widely appreciated for their value to pollinating insects.

This plant has a tendency to spread fairly quickly by seed and, on a personal note, has quickly established itself as the number one ‘weed’ of our urban garden. It is best kept in check if, that is, you wish to avoid it popping up everywhere from borders to footpaths and across gravelled areas.

Fun fact:  the common name of this species derives from the leaves’ curved shape and white, soft, fur-like hair coating. 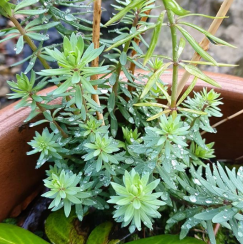 A tall, stiff perennial with pale green, almost glaucous leaves, the tall, deep purple flowers of this species make in a popular choice for gardens. While young, the leaves of this plant look as if they are positioned in conspicuous whorls – shown in the accompanying image.

It is native to Italy but has colonised much of the British Isles where is it found most commonly as a ‘weed’ of urban areas, cultivated or disturbed land.

Fun fact: L. purpurea is a known foodplant for the larvae of the rather beautiful Toadflax Brocade, a moth species which first colonised the UK in the 1950s.

A large, evergreen shrub sporting thick, waxy leaves and conical white blooms, this is another naturalised species here in the UK. Native to regions bordering the Black Sea, it has been widely planted for its ornamental value, as well as its use as game cover and for hedging. It’s tolerance for drought and shade mean that it readily outcompetes native flora and in some places, it has become a damaging invasive species.

Not so fun fact: the leaves and seeds of P. laurocerasus are toxic if ingested and are a well-known source of hydrogen cyanide. 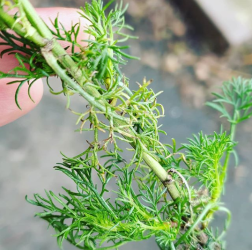 A mid-sized, erect plant boasting feathery leaves, the flowers of this species are typically daisy-like – consisting of a yellow disc and white petals. Despite its name, this species does, in fact, give off a scent. Unlike similar members of the Chamomille family, however, this is actually quite unpleasant. The smell emitted by Chamomille, contrastingly, can be descrbed as pleasant and is far stronger.

Common and widespread in the UK, this plant can be encountered as an agricultural weed but also grows widely on disturbed land and wasteground.

Fun fact: in Norway, this plant is known as Baldr’s Brow. A name thought to derive from the whiteness of the petals.