It has been a long time since I last stumbled across a White-clawed Crayfish during a lazy riverside walk in Northumberland, and longer still since I dared hope that their population here, in one of their last strongholds, could be considered anything other than ephemeral. It was a great pleasure, therefore, to hear that a coalition of conservation organisations are now taking a stand for the enigmatic species on a regional scale. The below text  stems from a press release from the Northumberland Crayfish Conservation Steering Group.

Last week, the banks of the River Wansbeck in Northumberland played host to the launch of a strategy that aims to help protect one of the region’s best-loved resident species: the White-Clawed Crayfish.

The ‘Northumberland Crayfish Conservation Strategy’, proudly unveiled by the Northumberland Crayfish Conservation Steering Group during the event at Meldon Park lays out a framework that will hopefully ensure the freshwater crayfish stays a resident in the region for years to come. A prospect that doubtless will come as a delight to the many local people quite fond of our native crustaceans.

Northumberland is incredibly lucky to have some of the best populations of white-clawed crayfish in the country. This is the only species of freshwater crayfish native to the UK and performs a key role in the ecosystem, providing food for otters, fish and herons whilst also aiding in nutrient cycling.

Despite its much-loved status, the White-clawed Crayfish is at risk of being lost from the region. Largely due to a disease spread by non-native Signal Crayfish that has seen the national population of native crayfish crash over recent decades. Simply put, the new strategy looks to help conserve one of the most threatened species in the UK.

More information about the crayfish strategy can be found here. 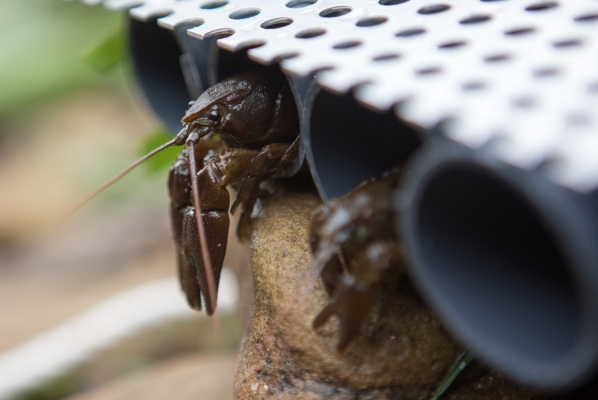 The Environment Agency is the lead national organisation for the white-clawed crayfish and we fully support the aims and objectives of the Northumberland Crayfish Partnership.

Their main threat is the spread of non-native crayfish species, which out-compete our white-clawed crayfish and an aquatic mould carried by these invasive species named crayfish plague. Although it is harmless to humans, it causes 100% mortality in our native crayfish populations. We can prevent its spread by not moving crayfish around, as well as, properly checking, cleaning and drying equipment such as wellingtons, nets, boats or other equipment.

We would advise everyone who is enjoying our environment to ensure they follow the important check, clean and dry advice as biodiversity is a critical factor in helping to protect the white-clawed crayfish.

In 2019, we have made significant steps to work with the Northumberland Crayfish Partnership, and the Environment Agency looks forward to working closely over the coming years and to undertake the practical conservation actions that will help preserve the habitat of white-clawed crayfish throughout the region.

In Northumberland we are incredibly lucky to have some of the best populations of white-clawed crayfish in the country. It is a legally protected species which lives under rocks and amongst tree roots in rivers, lakes and ponds.

Unfortunately, due to the introduction of crayfish from other countries around the world the species is now endangered and requires a significant amount of help to ensure the remaining populations survive.

The partnership includes a wide variety of organisations including conservation charities, non-governmental organisations, landowners and river users collaborating to identify risks and opportunities to make sure this endangered species is valued and protected.

In the future, we will also be working hard to raise awareness of white-clawed crayfish in Northumberland, through engagement with schools and communities where the species is present so that together we can help preserve this incredibly rare species for the benefit of our rivers and for future generations.