A week past, I had the pleasure of spending a full day in the uplands of Northumberland. A thoroughly enjoyable affair marked by the energetic courtship flights of returning waders, the go-back, go-back calls of innumerable Red Grouse and even the sight of a black cock or two. It was a joyous day, truth be told; though the collective, rather jubilant mood soon soured upon discovery of a grim sight: a stretch of fence adorned with the carcasses of countless moles. A sight witnessed again at a further two sites in close proximity to public roads during the remainder of our outing.

This is a sight I have seen before across the length and breadth of my home county. Mostly in remote upland areas it has to be said, but also in the lowlands – the practice of stringing up the corpses of deceased moles widespread across agricultural areas both here, in the North East of England, and elsewhere, right across the nation. It is something that I have always begrudgingly accepted, turned a blind eye to even, until now. This in spite of its tendency to turn my stomach. 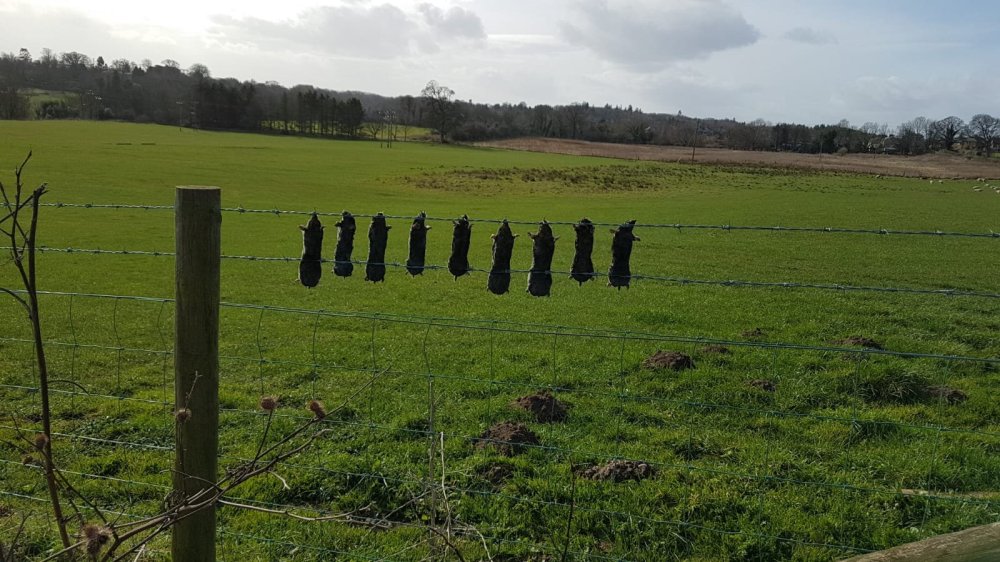 Now, it is no secret that some in the countryside sport a strong dislike of moles. While the practice of mole-catching is not as widespread as it once was, gardeners – peeved at the unsightliness of molehills on their perfectly manicured lawns – still do it, while farmers do so on a much larger scale. The latter, supposedly, in an effort to combat the spread of listeriosis bacteria into silage and to prevent the loss of arable land and grazing to molehills. Indeed, some sources claim that moles cost the UK economy some £27m each year through their subterranean antics.

This post is not intended to lambast the control of moles to protect human interests – although, on that note, I would urge restraint from some parties, particularly gardeners. No, I accept the need to manage wildlife in some circumstances and, quite frankly, do not know enough to pass comment on the sustainability, justification and overall impact of mole control. What I would comment on, however, is the ugly practice of suspending the bodies of unlucky moles from fences – a practice which reeks of the same Victorian disregard for wildlife that we, as a nation, have been trying (unsuccessfully in some cases) to escape for decades.

The practice of ‘stringing up’ wildlife is not a new one and with regards to moles, is conducted so that the landowner may gage the success of the person(s) employed to control wildlife on their land. Supposedly, the practice exists so that those concerned receive just payment for their efforts; although, in the modern age, you would think a photo would suffice – I’m sure those responsible own smartphones. If not, perhaps a box of moles deposited on the threshold of those who sanctioned the killing would be a better way of going about things? There certainly is little need to parade your ‘success’ in the manner discussed. Besides, that is, to antagonise the odd “townie” who may stumble across your grizzly showcase of rotting bodies.

Like a great many people, I find the brazen display of slaughtered wildlife repulsive. An opinion which, when voiced, will doubtless result in the same tired old claims of nimbyism, animal rights fixation and detachment from the ‘real countryside’. Fair enough, perhaps I am guilty of all the above. Perhaps I am even guilty of hypocrisy for accepting the need, in some circumstances, to control moles but by voicing concern at the final result. Roll on the comments…

What bothers me most about such displays, however, is not their gruesome nature, rather the example they set. As a society, we are rightfully moving away from our traditional disregard for wildlife. An increasing majority of people now genuinely care about the natural world. We concern ourselves ethics, sustainability and encouraging the next generation to take a stand for and respect nature. Even rural folk, those often subject to the ire of conservationists, profess to ‘care’ about wildlife despite the need, in some circumstances, to manage it. These claims appear empty as long as some continue to parade (and seemingly celebrate) the destruction of that same wildlife.

I do not think wildlife management should be conducted in the shadows, rather openly, honestly and with justification. Equally, however, it should be carried out with respect. Something sorely lacking in this case.