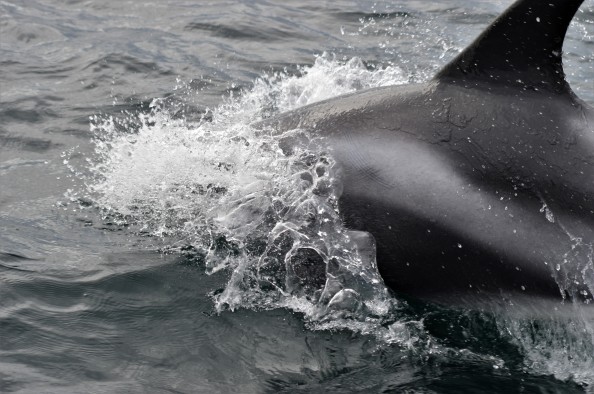 Yesterday I experienced something new and otherworldly: discovering a new side to my home county – Northumberland, for those who haven’t yet guessed – on a ten-hour trip into the North Sea with Northern Experience Wildlife Tours. The trip delivering a surreal experience as, at long last, I was able to get up close and personal with cetaceans in local waters, and resulting in a number of simply jaw-dropping moments.

Setting out from Royal Quays, the first few hours served to build anticipation. The sight of countless seabirds over open water – Gannets, Razorbills, Kittiwakes, Guillemots and more –  providing a welcome change from the norm, and a few Grey Seals, as ever, most welcome. It was not until the team at helm spotted a flock of Gannets feeding en masse, however, that things really picked up. The sight of myriad birds torpedoing downwards into the depths reminiscent of some Attenborough documentary; entrancing, at least until the birds lifted. Yielding the water to the barrel-like body of  Minke whale lunging up from the depths – the sight of this behemoth as it emerged and fell in one, surprisingly swift rolling motion, quite unlike anything I had ever seen before. Awe-inspiring – minkes may be relatively small in comparison to other baleen whales but they are still impressive beasts.

I missed the whale with my camera: intent on staring and enjoying, mouth agape, rather than fumbling for my lens. No matter. Moving further North, miles off-shore, there was plenty opportunity to take pictures – the sight of a single White-beaked Dolphin and its brief appearance at the bow of the boat a pleasing precursor to an experience quite unlike anything I have witnessed before, anywhere in the world. 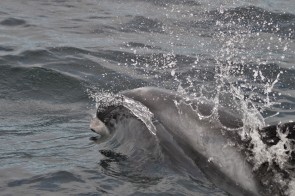 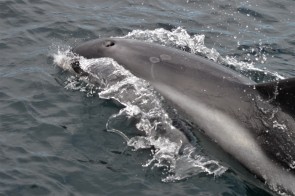 Soon enough, as we meandered our way North, our boat found itself accompanied by an escort of dolphins: one pod after another tailing the vessel before peeling off and leaving room for another entourage to join. The animals breaching incessantly at both sides, at times within touching distance, and providing the ideal opportunity for closer scrutiny. They really are magnificent animals: clad in alternating hues of grey but appearing almost blue and white under the water – far more attractive, dare I say, than the much more renowned Bottlenose dolphins we all know and love. Indeed, it is only while watching dolphins beneath the waves that one gets a sense of their true power – sturdy, rudder-like tails propelling them at a truly incredible pace.

Watching the dolphins break the surface of the water, it was possible to discern a few of the features that allow researchers to identify individual animals: scars, holes and pale patches lending the animals an individual sense of character and allowing easy separation from their kin. One individual, in particular, boasting a queer pink patch on its cranium became an instant favourite, and it was interesting to hear from those aboard that she had been observed with some frequency during previous excursions. I think recognition of individuals, and the connection that undoubtedly ensues, goes some way to explaining the unrivalled passion of cetacean researchers. They are an enthusiastic and terribly knowledgeable bunch! 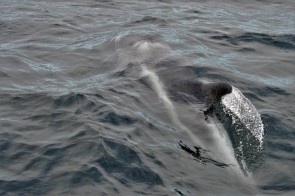 This weekends boat trip will certainly go down in memory as a winner. While also allowing me to easily respond to those who claim that “true wilderness” and breath-taking wild spectacles exist only on [or around] far-off shores. Indeed, my only regret is that I did not get a proper look at a dolphin leaping entirely out of the water. That said, the sight of a few individuals ‘spinning’ as they departed the waves vertically on the horizon did make for an enchanting sight against the sunny Northumbrian skyline. And already has me planning my return.