After a hot and busy day, I decided to take a walk to a nearby patch of green. Clouds were moving in and the breeze became stronger and wonderfully refreshing after the intensity of the June sun. This particular London common is divided in two by a road busy at rush hour with cars and cyclists and the two halves are quite different. The south section adjacent to the church is kept mown and enjoyed by dog walkers, joggers and people who come to sit and, in summer, to sunbathe. Yesterday a game of cricket was taking place, adding to the image of quintessential village life in the midst of the capital. Cross the road and you step into a meadow where the grass is left to grow and the edges are densely lined with trees. To my right was a copse of young oaks and beeches; a dog rose made a splash of soft but sparky pink and a cherry tree was providing a playground for young squirrels. 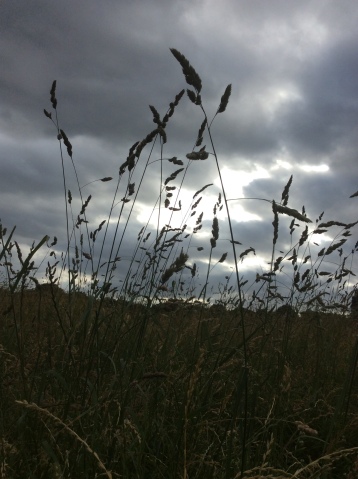 I decided to do a circuit of the common; a stroll and the sight of green was really what I wanted. A few paces on and I stopped to look more closely at the grasses. The textures varied a lot; one had a silky feel whilst looking like a horse’s mane and another had a purple hue which gave the meadow its mauve tint when seen in this stormy early evening light. Cow parsley stood tall, strikingly silhouetted against the sky. Clover lay close to the ground, its white flowers gleaming brightly in the midst of the green, and a delicate light pink flower entwined itself around the grasses. A tortoiseshell fluttered up in front of me as I stepped off the path to take a closer look. A moment later the sky became darker and I felt a drop of rain but the ground was dry and the wildlife would no doubt welcome the downpour. The mature trees edging the common all made their own shape on the horizon and together created a beautiful backdrop of soft lines and shades of green.

Perhaps it was the recent announcement of Heathrow’s expansion that made me subconsciously more sensitive to air traffic as I strolled out this midsummer evening. The contrast of the aircraft noise with this peaceful space was acute and there was no easy way to ignore it. I choose, for the moment, to live in the capital but to argue that I could move, though valid, is side-stepping the issue. It can be easy to feel despair at decisions taken by those in public office when they are not in agreement with your own views, and, as I headed home, I took care to notice the uplifting; a red rose growing over the railway, the shading branches of a horse chestnut tree. To paraphrase Simon Barnes in his book How to be a Bad Birdwatcher, just seeing and noticing is an act of rebellion. There is much to make the heart sing if we go about with eyes and ears open. Valuing the natural world is the first step to looking after it.