Spring has sprung, at long last. And all about my local area, the sapphire blooms of English bluebell mingle with the garish, Simpson-yellow of lesser celandine and the pristine white of flowering wood anemone. The air encompassing them ripe with the stench of ramsons carried on the breeze and nearby waterways – the ponds, streams and ditches that crisscross the landscape here – choked with riving masses of Amphibian spawn, just about ready to hatch. In the hedgerows, myriad insects buzz, spurred on by rising temperatures, and in the woodlands, trees stir as the canopy is painted green once more. A canopy which now, during the heyday of Spring, plays host to countless migrant birds, fresh from their travels and engrossed in the process of attracting a mate.

On the subject of migrant birds, I have enjoyed nearly the full array this week. Hoards of hirundines – swallows and martins – hawking for insects over bustling waterbodies; Blackcaps and Whitethroats uttering erratic bursts of song from within lime-green hawthorns; and even Swifts, that most iconic of May arrivals, screeching as they hunt in whirling arcs above street, field and copse. The occurrence of these resurgent wonders interspersed by other heralds of this most joyous of seasons: by reeling grasshopper warblers, hidden from sight yet conspicuous to the ear; and by common sandpipers, sedge warblers, whimbrel and dazzling yellow wagtails. Familiar species, longed for since they departed, who liven up my rural walks – replacing the redwing, fieldfare and waxwing that reigned supreme previously.

Of course, given the tumultuous nature of the season, the unfamiliar has also featured in my escapades of late. Manifested in the occurrence of birds I am not accustomed to seeing with any degree of frequency. Garganey and Black-necked Grebe, scarce wanderers, dropping in locally on route to their breeding grounds. The latter, a species currently teetering on a knife edge in this country, savoured as it fished, content, adjacent to a local bird hide. This individual just starting moult into its renowned, and rather beautiful, Summer plumage. As for the Garganey, the drakes (of which three were seen) appeared sublime in their alternating shades of brown, white and angelic, sky-blue – far more demure than the vibrant tones some of our more abundant ducks yet, in their own way, perfect. 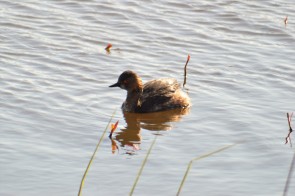 Despite their allure, both grebe and duck have, this week, found themselves eclipsed. Cast into obscurity by the arrival of a far more unusual visitor: a glossy ibis. A bird I have observed to no end in Spain, yet one I had not, until now,  encountered here, in my slightly cooler homeland. The bird in question – shown below – showing marvellously on a flooded field – catching earthworms in it’s near preposterously long and downcurved bill before tossing them back with gusto, in a jerky motion unique to long-legged wading bird such as this. Engrossing as it went about its business unperturbed by the crowd of admiring apes amassing mere feet away.

It is easy to see where this species gets its name, beautifully iridescent or dull, unassuming brown depending on the light. Ascetics reminiscent of the Ibis’s patron: the Egyptian god Thoth. A deity in the ancient pantheon often depicted with the head of an Ibis and credited as the inventor of writing, and alphabets. Indeed, watching the bird closely, a distinct sense of regality was observed of which I am sure its mythological counterpart would be proud. 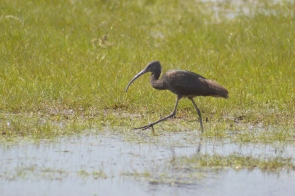 As the calendar advances and the last vestiges of our lastest, stubborn Winter finally dissipate, I find myself drawn increasingly into the avian world. Not because birds, in spite of their beauty and appeal, are somehow grander than other life, but because unlike plants, amphibians and even mammals – whose occurrence and actions one can quite easily, with some research, predict – they are erratic. Unpredictable in their movements to such an extent that one can never really know what will occur next, or what to expect.