Uncharacteristically, I haven’t managed many far-flung ventures of late – the combined result of some drastic life changes, a busy schedule and the build-up of myriad more menial tasks. This, of course, has frustrated me to no end, boiling over with a snap decision this past Saturday to drop everything and travel outwards: inland to the wild uplands of my home county. Northumberland, for those not in the know…

Truthfully, we could not have wished for better weather on our outing: bright yet chilly sunshine, half-hearted, almost enjoyable showers and, better still, only the faintest whisper of wind making for a pleasant day as we traversed the surrounds of Harwood Forest in search of, well, anything really. The morning beginning with a flurry of excitement as, from a well known local watchpoint, we caught sight of two Goshawk’ drifting in slow circles above a bottle-green stand of Sitka and Norway Spruce. A hell of a bird, to say the least, usually elusive (often infuriatingly so) drawn out into the open due to the pressing need to court and breed. Marvellous, and a first for Matt.

Here too, no less than seven Buzzards rode the thermals – staying clear of the aforementioned hawks as they drifted upwards, casting vulturine shadows on the woodland and heath below. Joined, on this occasion, by a pair of Kestrel – engrossed in similar, amorous behaviour – and, better still, two Raven. The fabled jet-black corvids kronking loudly as they passed overhead en route elsewhere. A fabulous start to the day – the experience and refreshing feel of “proper” wilderness only amplified by the vocal antics of multiple singing Skylark; the repeated alarm calls of a particularly perturbed Red Grouse and the rich, evocative melody of a Song Thrush positioned high in a roadside conifer.

Moving briefly away from the impenetrable margins of Harwood, a female Merlin lifted from the roadside – passing a few meters in front of the car with uncanny grace before proceeding to quarter a heather-clad bank to the East. A bird I enjoyed, to no end, during my time in the Highlands of Scotland but one I see far too little of here: a moorland sprite and a sight to be savoured.

It did not take us long to reverse our earlier decision to head out over the moor: the ground was soaking, rendering our boots useless, and we quickly grew tired of the slow, squelching march. Instead, we decided on a walk through the forest itself, spending two hours or so wandering a variety of well-worn forestry tracks. Hemmed in, at times, by the hulking frames of the assorted confiders – destined for eventual felling – and, at others, liberated by open vistas and extensive woodland clearings. It was the subtle signs of the changing season that held our attention here: frogspawn in temporary forest floods and the song of countless tits, finches and thrushes; the radiant blooms of pioneering Coltsfoot and the sound of chattering squirrels concealed amid the gloom. Each and all an indicator of exciting times still to come as the year progresses.

This being a coniferous plantation – albeit one of impressive magnitude – the wildlife here was typical of such habitat. Species abundant inland yet few and far between in the coastal reaches I call home: Siskin and Lesser Redpoll in impressive numbers, rust-coloured Crossbills perched high in the canopy and a lone Green Woodpecker doing its damndest to frustrate as it called incessantly, yet remained invisible within the thick wall of encroaching trees. It’s pronounced yaffling taking on almost a taunting nature as the bird eluded us for a good quarter-hour – finally giving itself up and permitting a brief glimpse as it dropped down to the roadside a stone’s throw from our parked car.

Heading home, it was the distinct feeling of rejuvenation that defined our journey. Perhaps a result of the gradual shifts observed this day in nature, as Winter finally yields to Spring, or perhaps due to our own relief. Nature has a habit of refreshing the mind and, while they are far from perfect, our uplands boast the uncanny ability to centre the mind: casting out stresses and troubled thoughts and, ultimately, uplifting those who choose to visit. 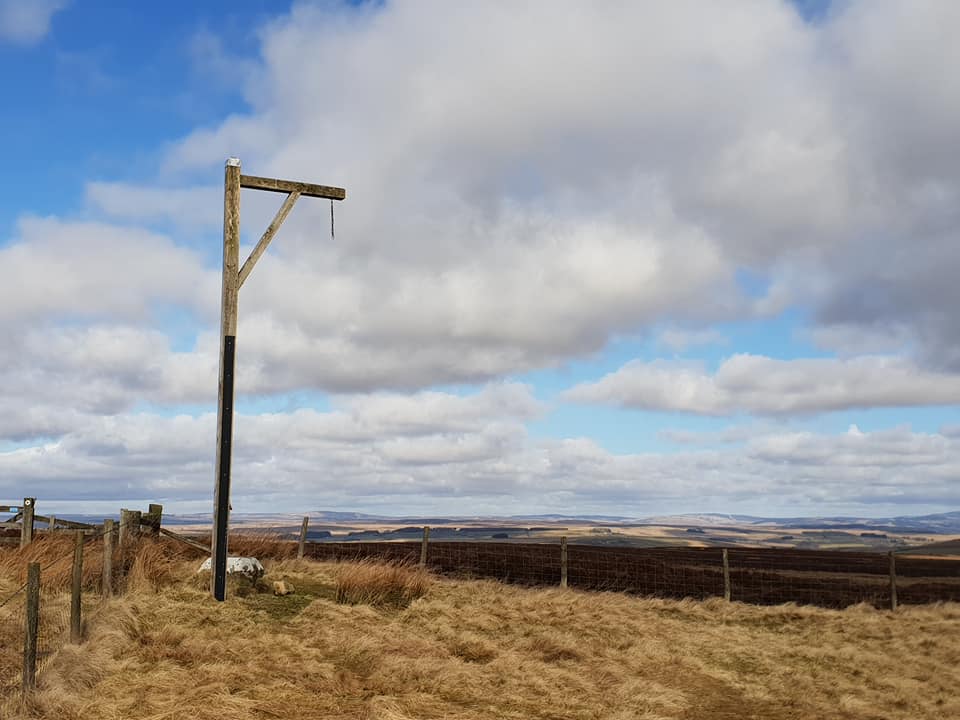 Winters Gibbet – the site at which William Winter lost his lift for the crime of murder during the year of  1791.