Bakethin, located a short-way upstream of Kielder Reservoir, is unique among nature reserves in Northumberland. Here, among the hulking frames of aged firs and a forest floor dominated by mossy knolls and straggly Bilberry, it is quite possible to pretend you are elsewhere: to imagine yourself strolling through the wilds of Scandinavia or Canada. The only sounds here, in the wild heart of the North-East, coming from natural sources: the soft plop of falling snow as, warmed by the sun, it tumbles from overhead branches, the sound of lapping water, creaking trunks and, of course, birdsong. It is this sense of wilderness, the feeling of isolation and remoteness, which makes a visit to Bakethin so enjoyable, cathartic even. This superb site boasting its own unique array of wildlife, quite unlike any other place in our region.

My visit to Bakethin started well, the sight of frozen waterways, frost-strewn mosses and delicate hoarfrost giving the appearance of a true Winter wonderland as we set out on the trail mid-morning. Indeed, while most of the previous night’s ice had melted in the Winter sun, trees in the shadier reaches of the wood found themselves festooned with some truly impressive works of ice. Branches, twigs and trunks alike coated in fern-like crystals, each similar yet also different from the last. Frosts such as this only form under the right set of climatic conditions, usually on clear and still nights, and, in truth, they were rather magical to see.

Following the woodland trail from our start point at Butteryhaugh Bridge, it did not take long for the site’s wildlife to become apparent. First, a Nuthatch scampering deftly up the trunk of a weathered-looking Sitka Spruce and next, a party of gold-black Siskin taking flight from the canopy and passing overhead against the blue sky in a flurry of pleasant twittering. Further into the wood, in the area surrounding the new (and rather nice) hide overlooking the reservoir, a Treecreeper showed well as it foraged in the dappled sunlight and the sharp, one-note flight call of a Great Spotted Woodpecker was heard as the bird passed by out of sight. These were, however, not the most exciting species to be seen here and soon, with a brief flash of soft-crimson, the days target species flew into sight: Crossbills.

Common Crossbills are not a species encountered very often by casual nature lovers in Northumberland. Their conifer-based diet and resulting habitat preferences meaning that they are confined, for the main part, to the interior of the county. To areas such as Kielder Forest, where their preferred food plants grow in abundance. They are extremely attractive birds: the males in their warm, red attire and the females in their paler, green plumage making for riveting viewing as they delicately extract the seeds from robust spruce cones. A sight we enjoyed for a good half-hour at Bakethin before the niggling cold forced us to take shelter in the lakeside hide. Leaving the birds to their feast in peace.

From the hide, the extent of the prior nights cold snap became clear: the lake frozen for around 25m in every direction. Something which resulted in what wildfowl there was – Mallard, Tufted Duck and Goldeneye – lurking far offshore. Not that it mattered much; the landscape before us, illuminated by the sun, making for relaxing viewing. A sight of tranquillity which, coupled with rare silence, made for a most luxurious pitstop. The ephemeral stillness outside now, set to disappear come Spring: when migrant birds arrive once more, wildflowers burst into life, amphibians and reptiles emerge and ice retreats, again, for another season.

On the return journey, the sound a singing Crossbill could be heard – although the bird itself was never seen – and, in the carpark, shaking branches heralded the arrival of another must-see Bakethin resident: a Red Squirrel. The Auburn one, boasting some truly impressive Winter ear-tufts, dropping briefly to the ground in search of food before taking off out of sight moments later. Red Squirrels are not doing all that well in the wider countryside, thus it lifts heart to see them going strong here, in their English stronghold. A testament to the diligent work of conservationists working to protect the precious population living across the wider Kielder Forest area. 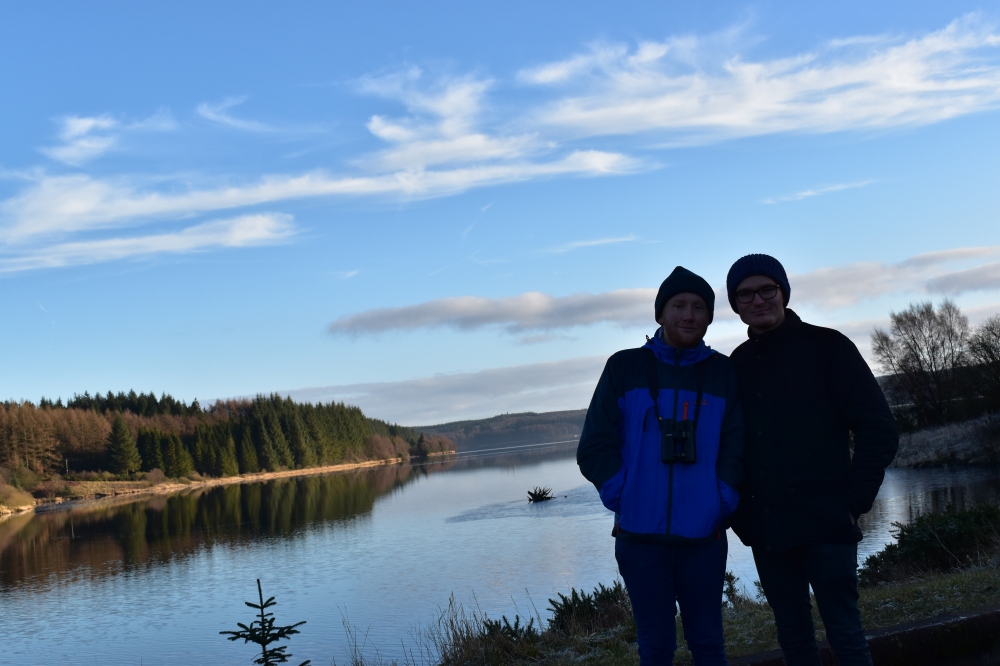