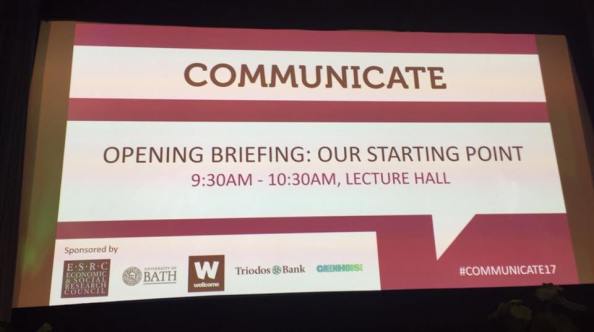 As those who follow me on social media will know already, this week I had the pleasure to attend the Communicate 2017 conference down in Bristol. An annual event I have read about previously, yet for some odd reason, had never given thought towards attending.

Expertly organisation by the Bristol Natural History Consortium, Communicate brings together environmental communicators, of myriad kinds, for two days of debate and enlightenment regarding emerging trends and challenges faced by those in the field. Indeed, the variety of delegates present at the event was phenomenal, if a little daunting, with NGO’s, media specialists, writers, campaigners, presenters, conservationists and scientists represented in equal measure.

My small contribution to Communicate was a hosting role during the Move Over Millenials session held on the second day and expertly presented by Naomi Sesay from the Media Trust (it really was incredibly rousing). While I, personally, thought that nerves got the better of me and I failed to say most of what I had planned to get across, the feedback from this session has been incredibly supportive and I can’t thank Savita, Matt, Miriam and other organisers of the event enough for the opportunity to face my fears and partake. This, for me, was not the high-point of the conference, however.

No, in my opinion, the most rewarding aspect of Communicate was the chance to learn directly from those who have, for all intents and purposes, already made it in the field in which I one day hope to work. The expertly presented talks and toolbox sessions providing ample food for thought and gifting great inspiration for future endeavours. If I had to choose a highlight of my stay, it would doubtless be the Social Media on a Shoestring session. A short presentation by Organic UK regarding emerging trends in social media, and how to maximise the impact of virtual comms. Something which, as a blogger, will doubtless be of great benefit to me in the future. I did, however, very much enjoy Naomi’ in-depth session on Generation Z, and the day one discussion on echochambers. In fact, it was all rather good; though sadly I was forced to depart the conference before hearing Jeff Knott’ discussion on managing conflict. Another session I am sure would have stood out.

It was great to see some younger communicators represented during conference proceedings, though as somewhat of an advocate for youth engagement, this is one area I feel improvement could be made. And I would like to see more youth-led sessions at Communicate in the future. For the main part, however, I cannot fault a thing. The conference was hosted fantastically by the eloquent Tim Scoones, Bristol Zoo is a sensational location, and everyone in attendance was really very nice. Kudos to the event’s organisers who did an all-around fabulous job at managing proceedings. It must be an awful lot of work!

Heading forward from Communicate, I now feel much more confident on both a personal and professional level. Reassured that I am on the right track and that projects such as New Nature are both valued and appreciated. A few interesting conversations were had that may lead to exciting developments on this blog at a later date but, for now, I will leave you with a few photos of what was a marvellous first trip to a terribly rewarding event. I hope to attend again in the future.