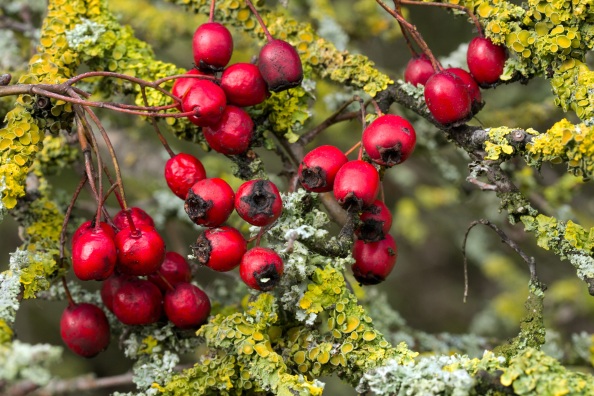 Traversing the sunny (yet surprisingly cold) depths of Half-Penny this morning, one thing struck me above all else: the bounty of Autumnal fruit. This year, each and every fruit-bearing shrub appears laden with berries, much more so that usual. The stand of Blackthorn that grows, spindly and unkempt, by the entrance to the wood abounds with deep blue berries that grow purple when touched, as the queer powdery substance that adorns them is swept aside. Add to these no end of glorious red Hawthorn fruits, damsons, crab apples, rose hips and slowly fermenting blackberries, and the wood is starting to resemble a rather decadent fruit salad. Ready and waiting for the imminent arrival of migrant birds.

Some migrants have touched down in the past week, another sure sign of the shifting season. The most numerous of these being Redwings, with some twenty noted on the passage in recent days – the distinct seep of roaming flocks audible by dusk, as the thrushes pass overhead, shrouded in darkness. Their larger cousin, the Fieldfares, have yet to materialise; though both blackbirds and song thrush have shown a distinct upwards trend of late. Joined by an apparent arrival of robins (I counted 22 ticking from the shrubbery the other day) and diminutive goldcrests. Of course, given the nature of the season, Summer migrants have not departed entirely, just yet at least. A few Chiffchaff and Blackcap still loiter, while the occasional Swallow can still be seen; though these look set to vanish in the coming days, yielding the skies and treetops to more typical winter fare.

Another sure-fire sign of the not so subtle shift from Summer to Autumn has come from Half-Penny’s Jay population – many of whom can now be seen flying high between the wood and nearby town, as they transport acorns between favoured feeding sites and their Wintertime hoards. This processing of caching – storing food for the harsh days of Winter – is not limited to the sites corvids however, indeed, the many Nuthatches that dwell within the wood have begun to do the same. As have the Grey Squirrels – those glaring icons of invasive tenacity which first colonised the wood back in 2013. Now, they scamper and dig, squeak and chew, as much a part of the wood as the reds that resided here during my childhood. I do, however, have some interesting news on that front to be revealed at a later date.

Finally, we come to another, much more subtle sign of the Autumnal shift in nature: the behaviour of the sites resident passerines. Indeed, tits (blue, great, long-tailed and coal to be precise) have begun to amass into impressive flocks, scouring the wood in search of food. This behaviour thought to be born equally of increased vigilance with regards to predators – sparrowhawks mainly – and the greater ability of a flock to find food, as opposed to a lone individual. Elsewhere, the resurgence of the elusive Willow Tit in the wood provided equal indication of the advancing calendar this week – they only ever appear here around Autumn – while, by the river,  both the Kingfishers and Grey Wagtails appear to have departed the riparian abodes they favour, doubtless off to the coast ahead of the predicted chill. I will miss them. Though the sense of loss that coincides with their departure will doubtless be soothed by the arrival of Winter migrants in the coming weeks. Who knows, maybe this year will once again see Half-Penny graced by the presence of Waxwings, or the river by a wayward Goldeneye. 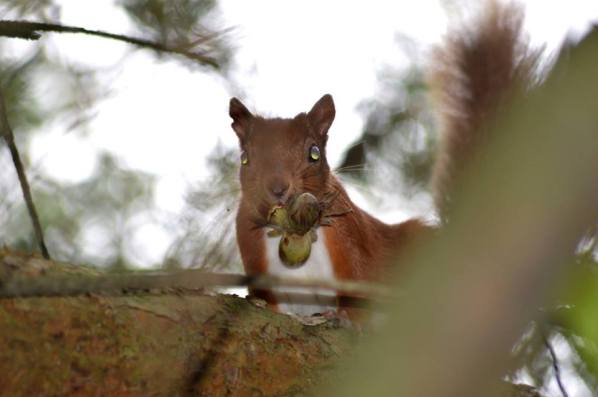