Sadly, I have not been able to get outside half as much as I would have liked to over the past week. Largely due to Masters commitments (it is proving slightly more difficult than expected) and other, more menial tasks. I have, however, managed a few brief ventures into the great outdoors and what I have seen has delighted – comprising a smorgasbord of seasonal delights. With the vestiges of Summer now banished entirely and Autumn advancing towards Winter full throttle. It has all been rather lovely in truth, though it is the birds which given the greatest cause for celebration.

The most obvious sign of the shifting season has been the resurgence of waterfowl around my local patch. Wigeon, Gadwall and Teal – absent from the estuary during the warmer months now beginning to return in small numbers. With them, a handful of delightfully iridescent Goldeneye – all drakes so far – and a noticeable increase in the number of Mallard. Indeed, I sometimes forget that, like other ducks, Mallard move in winter. Geese too have been a firm fixture of the past week and barely a day goes by now absent sight of racuous skein of Pink-Feet passing high overhead. Though there have been Barnacle Geese too, fresh from Svalbard perhaps, and a handful of Brent Geese heading South with some haste. I am still awaiting my first Whooper Swans of the Autumn however…

Change is certainly afoot elsewhere in the avian world too and it has been almost a fortnight since I noted my last Summer migrant. The Chiffchaffs and Blackcaps that combed the hedgerows and thickets a short time ago now replaced by a ceaseless torrent of Goldcrests and, of course, Winter thrushes. With Redwing in particular, proving numerous over the past few days: tossing back the plentiful Hawthorn berries that, at present, stain the hedgerows a pleasing glossy red. These “seeping“ flocks interspersed, occasionally, with a few Fieldfare and Mistle Thrush. All very nice to see though perhaps the most enjoyable sight this week came from a mixed flock of thrushes, as no less than five species descended on a local growth of Spindle. Polishing off the petite pink berries with glee, rendering the area much less appealing to my prophecised Waxwings. A species which is missed here only last week. Though who knows, given the sheer number of the crested beauties spilling into the country at present I would be very suprised not to see one soon.

What else? Well, as ever, finches have proven a good indicator of the season. The Brambling that first descended in early October dispersing, except for a few individuals, only to be replaced by a great deal of Siskin and Redpoll. In the wood, in my garden and even on the beach – noted as passed overhead on route to their favoured wintering grounds. Flocks of Linnet and Goldfinch are swelling too, feasting on Thistles in dunes and wasteland areas, and Greenfinch have become much more conspicuous, much to my delight. Their chlorophyllic hue a welcome sight given the woeful state of the British population at present.

Finches, thushes, dabblers and geese, however, have not provided the only indicators as to the advancing calander. And this week has seen my first Red-Breasted Mergansers back on the River, as well as the first returning Little and Great Crested Grebes. The local Kingfishers appear to have set sail downstream, as often they do in Autumn, and are now in residence amid the harbour, while the resident Dippers too appear to have moved. Yielding their favoured spot upstream in favour of more saline reaches towards the coast. Elsewhere, tit flocks have formed, Jays continue their hourly acorn-fueled flights across my town and my first Little Gull of the season was observed from my favoured seat in the dunes – dainty wingbeats and sooty underwings leaving it plain to see among the countless bodies of its much more numerous kin.

Summer has gone, Autumn is here and, if the birds are anything to go by, Winter will soon be upon us. I look forward to the sight of Little Auks bobbing in the surf, Long-Tailed Ducks, Divers and, of course, Waxwings. Though, for now, I am happy to watch, wait and engross myself in the finery of the season. 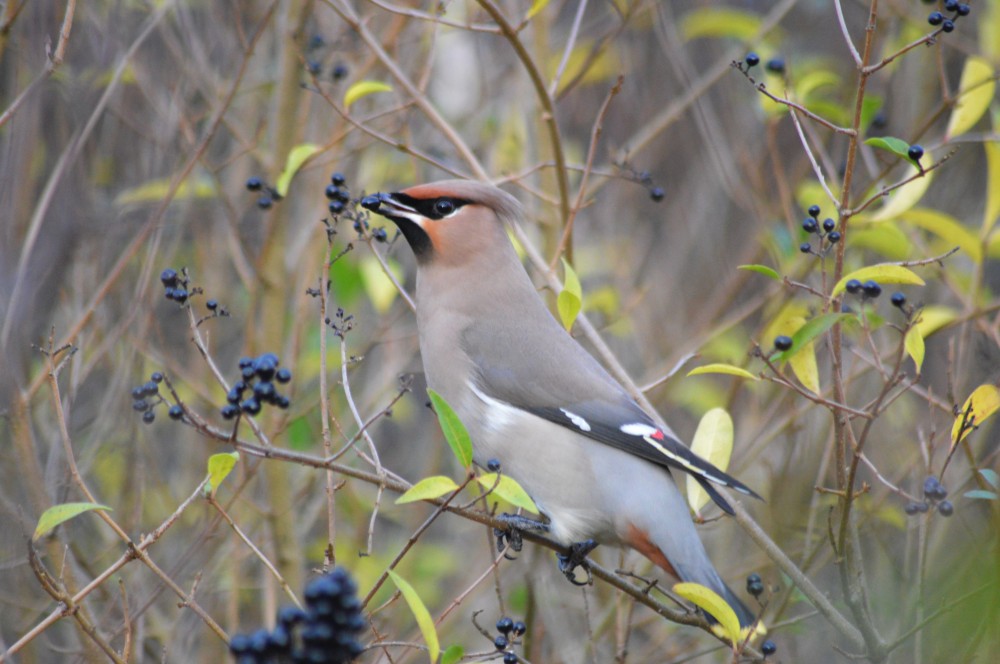 Waxwing from earlier in the year