Orchids hold a fascination for many people around the world. For me that began when a Common Spotted Orchid (Dactylorhiza fuchsii) popped up in an unmown area of my parents’ lawn one summer when I was a child. They slowly spread and it became a game each summer to see how many there were flowering alongside the Knapweed in the long grass. Last year there were over thirty.

As I’ve grown, my passion for wildlife has grown too and my love of wildflowers has intensified. I am lucky now to have travelled to some wonderful locations and seen some incredible wild Orchid species. As the Green Winged Orchids (Anacamptis morio) are in full bloom in a local meadow I thought I’d share a few of my favourites and my experiences finding them. 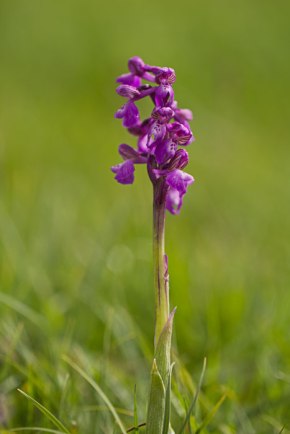 For many, Orchids can be a confusing group of flowers to study and it is true that they seem to hybridise readily which doesn’t always help with identification. With a little perseverance and a keen eye though, it soon becomes apparent that there are certain characteristics to look out for which will give a definitive answer. The next challenge is where to find them in the first place.

In the French Alps if you want to know where you might find Orchids, ask a local – it seems like almost everybody knows where to find some and they are proud of it too. This is particularly true of some of the bigger, blousier species like the glorious Lady’s Slipper Orchid (Cypripedium calceolus). By contrast, in Britain, it was collected nearly to the point of extinction and now clings on at only one closely guarded site.

I will never forget the first time I saw these spectacular flowers as a teenager on holiday with my parents in Austria, my mother suddenly asked that we stop the car on a quiet country road because she thought she’d seen some and sure enough in the dappled shade there was a clump set back from the road a few meters under the trees. Her knack of spotting unusual flowers from a moving car is incredible and my husband claims I’ve inherited the trait, as I too often ask him to stop in strange places so I can jump out and look at things!

For me one of the appeals is the common names of the Orchids – there are Lady, Man, Military, Frog, Monkey, Bee, Woodcock, Butterfly and Fly Orchids fro name a few. They are often reflective of the individual flower shape or colouring and are somehow quite charming. The Monkey Orchid (Orchis simia) is one of my many favourites with beautiful bright colouring and a very monkey-like shape complete with tail.

Some names are less imaginative but very descriptive such as the Pyramidal Orchid (Anacamptis pyramidalis) named for the shape of the flower spike, or the Burnt Tip Orchid (Neotinea ustulata) which has dark purple flower buds that open from the bottom up into white speckled flowers, and give the impression that the tip of the flower spike is blackened.

There is a sense of the exotic in many species of Orchid, we are of course all familiar with the brightly coloured potted versions available from supermarkets and garden centres but we don’t expect to find anything quite so striking in the wild. I haven’t had the opportunity to visit a jungle habitat to see any really large orchid species (yet!) but I was pleasantly surprised that there are some European species which are not a million miles from those aforementioned shop-bought varieties. Of course the Lady’s Slipper falls into this category but there are others too. The Violet Bird’s Nest Orchid (Limodorum abortivum) of the Alps, and the Eastern Marsh Helleborine (Epipactis veratrifolia) found in Cyprus despite being more common in Asia, are both contenders.

The most recent orchids I’ve added to my list were in Sardinia where my favourite was the Mirror Orchid (Ophrys speculum). It was quite different from a lot of the other species I had found in the past and illustrates my continual astonishment at just how diverse Orchids are from those which are parasitic and lack chlorophyll such as the Bird’s Nest Orchid (Neottia nidus-avis), to the Fragrant Orchid (Gymnadenia conopsea) which lives up to its name and grows in great swathes where the habitat is suitable. Sometimes even that first species to take my interest surprises me, such as the time I came across a rare variant, Dactylorhiza fuchsii var. rhodochila.

Despite all of my wonder and excitement at finding, photographing and identifying Orchids, there is one major factor that I alluded to earlier which I simply don’t understand: Seemingly in Britain in particular, Orchids continue to be sought for collections to the point of detriment. It is such a shame that these beautiful flowers seem to be at greater risk on home shores than abroad despite the efforts of charities like the Wildlife Trusts and Plantlife. I can only wonder whether I will be able to pass on my love of Orchids to my children in the future as my mother did to me, or whether I will have to settle for telling stories of the days when they grew in the lawn.

To find out more about Alice (and her marvelous work), please visit her blog at: http://www.hunterphotos.co.uk/blog/ or follow her on Twitter at: @AHunterPhotos