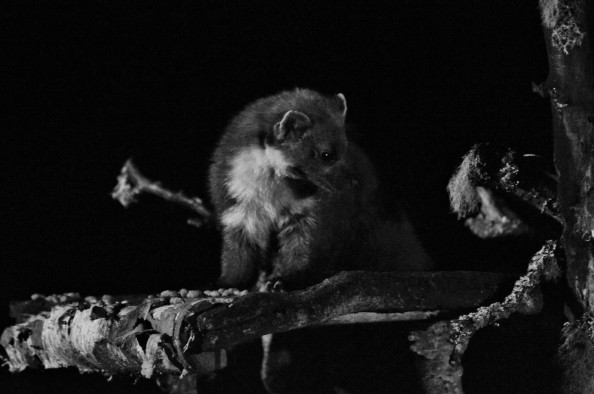 I’ve been back from Scotland a mere few hours and already I find myself compelled to waffle about what was, in truth, a truly exquisite few days. The highlands have always captivated me; the rugged terrain, vast native forests, whisky, haggis and, of course, superb wildlife. This week found me presented with the perfect chance to indulge my passion further courtesy of a rather spontaneous trip with Ian Craft (@TotalEcology) and Sacha Elliot (@Sacha_Ecology) – something for which I am awfully grateful. With  up close and personal encounters with iconic mammals, great birds, panoramic views and even a vagrant gull I certainly had a good time and have rather a lot to talk about here.

Where to start? Well, the undisputed highlight of the week was a visit to the famed Speyside Wildlife Hide situated on the beautiful Rothiemurchus Estate. This is site I am forever seeing featured on TV and on the blogs of other naturalists thus it was wonderful to finally visit myself! The fellow operating the hide was fantastic; a real font of knowledge with regards to Scottish wildlife though, of course, it was the animals themselves that proved most exciting. First came Badgers, four of them to be precise, feeding mere meters from windows where we sat wide eyed and excited. Indeed, until now, I have only ever seen Badgers as distant blurs and it was truly exciting to view them at close quarters. These fed for perhaps an hour outside the glass but soon faded into obscurity when our target species emerged from forest. I am of course referring to Pine Martens! Two of which showed throughout the duration of our visit, giving impeccable views as they snaffled peanut butter and eggs. The sheer size of the Martens  actually came as quite a surprise to me, much bigger than I had anticipated but no less wondrous. The monochrome images below simply do not do them justice though I had little choice but to shoot in black and white, my little camera not fairing all too well in the low light. 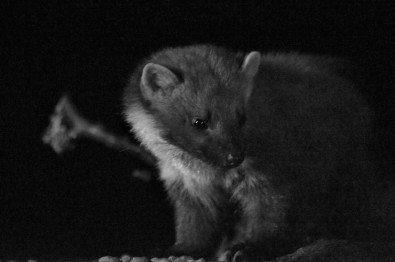 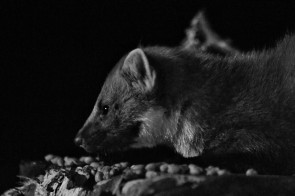 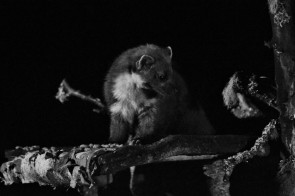 Speaking of the Rothiemurchus Estate, a few spare hours during the day allowed us to appreciate the estate in all its diurnal splendor. Truth be told however, aside from a brief woodland wander I barely left the carpark! Lazy, not quite; the feeders here held a couple of confiding Red Squirrels and a good mix of common woodland birds with Siskin, Chaffinch, Coal Tit and Great Tit well represented and both Song & Mistle Thrush singing nearby. The Squirrels proved to be the highlight however, perfectly demonstrating their athleticism as they attempted to extract peanuts from the feeders. The Squirrels here looked somewhat different to those in my native Northumberland, largely blonde as opposed to red. I would be interested to know why this is if anyone reading this post knows? Anyways, elsewhere on the estate the loch held a number of returning Goldeneye and three Grey Wagtail fed around the margins. Sacha had a Crested Tit here though wandering off to ogle Squirrels I sadly missed this. A great site and one than I will undoubtedly visit again in the future.

Sticking with the woodland theme, a visit to Loch Garten RSPB proved enjoyable despite the reserve itself being closed. Staking out the car park I was delighted to catch sight of a Crested Tit making the most of the peanut butter provided by the throng of eager photographers. Easily my best views to date and pleasure to behold under any circumstances. A Great Spotted Woodpecker also showed well here as did the other, more run of the mill, odds and ends. A visit to a second woodland site with the express intend of catching sight of my first Capercaillie failed to reveal our quarry (we didn’t stray from the path – disturbing Capers is a no go in my opinion) but did provide four more Crested Tit and an all too brief Common Crossbill.

Of the additional sites visited within the Cairngorms, two in-particular stand out; first and foremost, Cairngorm itself. Here we set out with the express intend of catching up with the areas renowned Ptarmagin – though due to time constraints we did not make it very far up the mountain and, as such, not see any. We did however catch up with a number of particularly showy Red Grouse (a real favourite of mine) and the sites resident herd of Reindeer, some of which decided to plonk themselves in the road. Not native nor truly wild but enjoyable all the same. Secondly; we paid a visit to Findhorn Valley where we very lucky enough to catch up with a pair of Peregrine alongside Buzzard, Kestrel, a few Brown Hare and more surprisingly, a group of rather shaggy Feral Goats!

As the title of this post suggests, we also spend a good deal of time on the Black Isle, north of Inverness. This was the location of our abode for the weekend; a delightful cottage in the town of Avoch – a town that provided its own wave memorable encounters. Setting up shop outside the house, a few stints scoping the Moray Firth came up trumps with a cracking Great Northern Diver and a number of Long-Tailed Duck – some of which had transitioned into breeding plumage. The Loch also threw up Guillemot, Razorbill, Goldeneye and Wigeon while the shoreline teamed with waders, gulls and a good number of Hooded Crows – a species I do not see all too often. A Tawny Owl provided a welcome garden tick here while further west at Chanory Point we were lucky enough to gain VERY close views of a pod of Bottlenose Dolphin fishing mere meters from shore. At least six individuals were seen, among them a very young calf though it was the adults that proved most exciting; some of them breaching entirely and inspiring no end of enthralled gasps! Gasps that were promptly exaggerated when a Black-Throated Diver passed overhead on route to the sea. 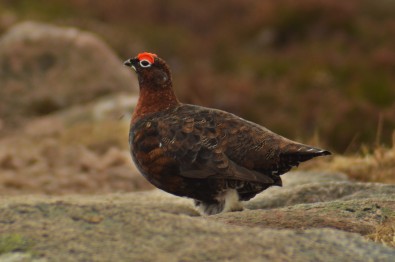 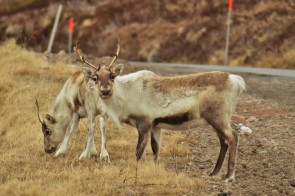 While exploring the Black Isle we also paid a visit to the Red Kite feeding station and much to our surprise found the site entirely deserted, excluding the extremely knowledgeable RSPB warden with whom we chatted for a good hour. The kites themselves did not disappoint, snatching lumps of steak from specially designed feeding platform and giving otherworldly views for a good half hour. Following this, myself and Sacha found time to indulge our fondness for rarities – setting off to “twitch” the returning Ring-Billed Gull in the town of Dingwall. Sure enough, after a little scanning, the bird was located on top of the academy where it snoozed in the company of the resident Herring Gulls. A smart American vagrant and a great way to conclude the trip. Hurrah!

So, there you have it! Our jaunt up North proved to be a thoroughly enjoyable affair. My only regret? That I did not have more time to explore the area. I will definitely be back and next time will set about catching up with the species missed during the aforementioned venture. Of these; Capercaillie, Scottish Crossbill and breeding plumage Slavonian Grebes are perhaps my most longed for targets. 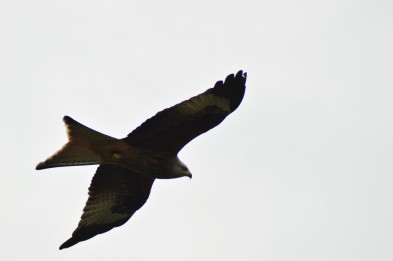 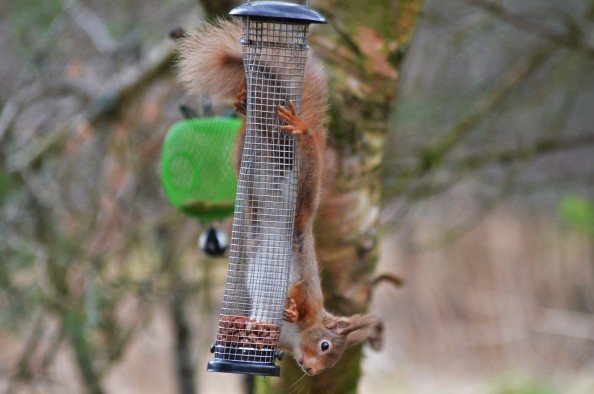