So, I’m back and what an amazing few days! Before I get to the all important birding, I would just like to say a huge thank you to everyone involved with the recent FIO2016 press-trip to Extremadura. The whole ordeal was nothing short of eye-opening and I am incredibly grateful to Vanesa Palacios and Yarida Chaparro for hosting, what was in truth, a truly outstanding trip. Likewise our guides, Marc Galvez (@Onaga_Ambiental) and Godfried Schreur were fantastic, full of intriguing facts and extremely talented – truly I do not think I have ever met anyone so overtly knowledgeable! It really was an real honour to be included on this venture, if a little dumbfounding. Watching wildlife alongside the likes of Sheena Harvey and Matt Merrit, the editors of BBC Wildlife Magazine and Bird Watching Magazine respectively, plus a host of tour operators from as far away as Hong Kong and the USA left me a more than a little starstruck. All in all, I am very grateful for the opportunity and hope to visit Extremadura again in the future (If I do not decide to move their permanently first). Now however, birds..

Where better to start than with Monfragüe National Park, our first port of call and the jewel in the crown of Extremadura. Monfragüe, the only national park in Extremadura far surpassed expectations. Comprising picturesque mountain ranges, large expanses of dehesa bursting with Holm Oak and Cork and, of course, the Tajo river; the park truly is a fantastic location – holding some of the areas most iconic species and more than enough to keep any birder enthralled for hours.

Heading first to the Castle of Monfragüe, a short walk up the wooded slopes provided our first chance for some real Spanish birding. Here the abundant trees teamed with Firecrest, Chaffinch and Serin while Short-Toed Treecreeper was heard and a delightful pair of Red-Billed Chough circled overhead. Heading up towards the castle and stopping occasionally to admire certain botanical elements yet more species became apparent. First, a Jay briefly broke cover before a passing Hawfinch diverted our attention; next came Iberian Green Woodpecker, Crag Martin and Black Redstart followed quickly by my first “lifer” of the trip, a wonderful pair of Rock Bunting feeding by the track. Only after admiring these (and picking up Blackcap and a calling Red-Legged Partridge) did we reach the castle itself where we were able to enjoy magical panoramic views of our surroundings. As if the views were not enough, the site also abounded with Griffon Vultures, more and more lifting from their cliff-top perches as the morning went on. These showed marvelously here, some 150 noted throughout the morning and some giving impeccable views as they flew mere meters overhead. As if it could not get any better, soon a number of Cinereous Vultures joined the fray, riding the thermals overhead alongside a a scattering of Egyptian Vultures. All together, the three species present, provided one of the most memorizing spectacles I have ever had the pleasure to behold. Something only enhanced by a distant Black Stork (too distant to tick), the constant calling of the nearby Chough’s and the addition of Red-Rumped Swallow to our ever growing list. What a way to begin the trip! 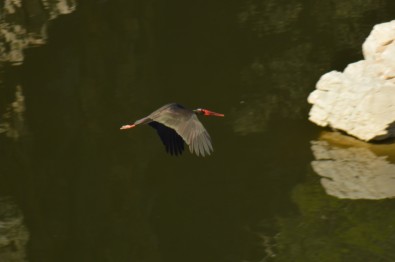 Next on the agenda was a visit to another area of the national park, the Salto del Gitano where we were treated to exceptional views of six Black Stork – another lifer for this relative novice! Here Griffon, Black and Egyptian Vultures delighted once more and a distant Sparrowhawk sailed on the horizon. From the viewpoint Marc also drew our attention to a Peregrine nest while the vegetated margins of the reservoir provided a hub of passerine activity. Serin, Goldfinch and Sardinian Warber proved abundant here, as did Crag Martin, while three Red-Rumped Swallow gave good views and both White Wagtail and Great Cormorant were new for the trip. More interesting still was the presence of two more Rock Bunting while a utterly superb Blue Rock Thrush sung from a nearby ledge and a distant Black Wheatear was expertly scoped by our guide. Three more “lifers” in the bag and smiles all around, when I return to Extremadura I will certainly return here for longer and would advise anyone visiting the area to do the same.

Following our success at the Salto del Gitano, our next port of call was the Extremadura Birdwatching Fair which, as expected, proved to be a fantastic affair. Soaking up the atmosphere for quite some time, I found it quite difficult to drag myself away from the tantalising tour marquees but when I did, I opted to set off into the dehesa for a few hours solo birding – something which proved incredibly rewarding, if also a little frustrating – the lack of a guide making identifying larks somewhat difficult. First came nice views of another lifer, a small flock of Azure-Winged Magpie followed promptly by both Cirl Bunting and another cracking Blue Rock Thrush, this time on top of a dilapidated barn. Corn Bunting were everywhere here (as they were in all of Extremdura), their “jangling key” calls a welcome change to the norm while a flock of some c200 House Martin gathered around a small puddle and a pair of Black Redstart skipped around the footpath. The male bird proving particularly obliging. Serin were, of course, rather numerous also though two Siskin came as somewhat of a surprise before being scared off by an Iberian Grey Shrike. Moving on, yet more time was spend scrutinizing the sites lark species, a venture that yielded both Crested Lark and Thekla Lark – both of which were new birds for me.  Heading back to the rendezvous, a Hoopoe briefly crossed my path and an array of more familiar species were added, among these; Greenfinch, Dunnock and a good number of Barn Swallow. These however were soon forgotten as I was commandeered for an interview by a local TV crew and rather awkwardly set about singing the praises of Extremadura in front of a rather large camera. Another first!

On a side note – there is of course, a lot more to Extremadura than just birds and my all too breif solo jaunt at the fair provided an opportunity to scrutinize the sites invertebrates in a little more detail. Of these, it was the plentiful butterflies that proved most interesting with two new species seen including Spanish Festoon and Large Tortoiseshell alongside a healthy array of Clouded Yellow, Brimstone, Bath White, Painted Lady and Red Admiral. These, alongside an intriguing Bee-Fly and a pair of Red Deer helped fill the quieter spells of the walk rather nicely. Who knows what I could have unearthed with a little more time. Another incentive to return at a later date? I think so, though, as ever, birds will always take precedence. 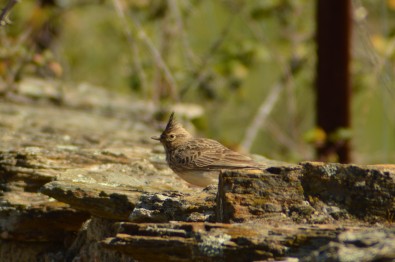 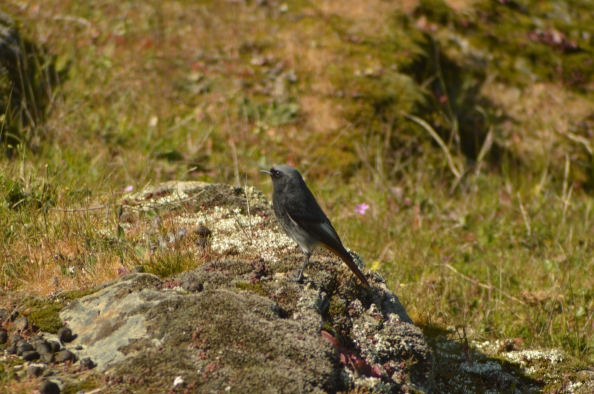 Well, that is part one of my Extremadura trip-report over and done with. Believe it or not, all of that listed above took place during the first full day of the trip! I figured it would be best to split these posts up a little bit (if only to include all of my pictures), stay tuned for part two in the next few days.