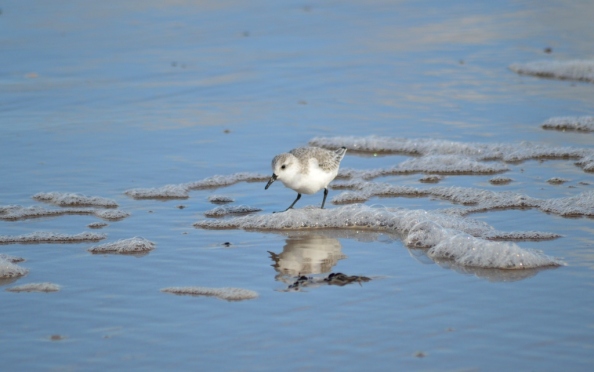 This weekend found my firmly rooted to the local patch, hunkered down on the coast as the right mix of weather conditions forced numerous seabirds close to shore and well within range of my rather poor scope. Despite my frostbitten fingers and numb toes, this weekend found me indulging in one of my best seawatches to date with the patch coming up trumps with a host of avian treats. Of course Cambois did not throw up the huge numbers of birds seen elsewhere on the Northumbrian coast but this was of little consequence with all the main players well represented. I have discussed my contempt for the “cold and tedious” practice of seawatching before on this blog but after this weekend I think I may have altered my opinion somewhat..

Starting first with the birds that I missed this weekend and on two occasions now have I missed out on Balearic Shearwaters, two of which were seen mere miles from the patch. Likewise both Glaucous and Iceland Gulls were noted from seawatching spots both North and South of me and both Red-Necked Grebe and Long-Tailed Duck managed to slip by unnoticed. Still, you cannot win them all I guess and what did show more than mitigated my losses.

The main target of this weekend was Little Auks with the strong winds bringing hundreds, if not thousands close to shore right along the east coast. Determined not to miss out but keen to add them to the patch list I decided to forgo popular sites such as Newbiggin and St. Marys in the hope of nabbing a few a little closer to home. Thankfully this proved to be one of my better ideas and over the course of the weekend 78 of the little beauties were notched from Cambois. This is by far my biggest count to date having only seen this species on a handful of occasions, both at home and abroad, usually only in small groups. Though some of the auks passed by relatively far out, a small number could be seen flying directly along beach, giving immaculate views the whole time. Little are definitely one of my most eagerly awaited season spectacles!

Moving on and among the other highlights this weekend a single Sooty Shearwater came as a little bit of a surprise and marked my latest record to date. A trifle less surprising but no less enjoyable was the addition of 6 Velvet Scoter over the course of the two days. The first birds, a group of five, were rather distant and sped off North in a hurry, the second however showed much better. Indeed the bird in question, a female, sat contently on the sea during the length of today’s session, showing rather well at times. Definitely one of my favourite ducks! Elsewhere other highlights here included a party of 3 Great Northern Diver heading North  close to shore and an Skua species heading south. The latter remains unidentified as such though I suspect it may have been Pomarine and thus a lifer should better views had been obtained. Drat!

Wildfowl passage was extremely evident over the weekend with a great deal of more common duck species on the move. Among these Wigeon were perhaps the most numerous with around 110 passing by during my stay. Teal too were plentiful though less so than the former with upwards of 50 heading North in small flocks, often in the company of a few larger Wigeon. A total of 49 Common Scoter were picked up, some of which showed  rather well as they fished behind the breakers. With these, 10 Red-Breasted Merganser and a few Goldeneye. Aside from those stationary on the sea a further 32 Goldeneye were also noted heading North and on one occasion a flock passed by with 6 Scaup in toe. The first time I have observed the latter out to sea no less! Aside from these, other ducks species noted included 4 Mallard and 3 Shelduck heading North and a number of Eider bobbing around on the sea. Sticking to the theme of wildfowl and 11 Whooper Swans heading South were nice to see and a skein of around 20 Pink-Footed Geese passed overhead at one point. A rather impressive list though this was only to get better..

In addition to the goodies listed above a good number of other, more regular species were also picked up over the weekend. Among these; a few Gannets, all juveniles and all heading south as well as 3 Red-Throated Diver moving in various directions. A rather small count of the latter compared to last week. Cormorants were of course plentiful here, as were most of the common gull species with Herring, Black-Headed, Common and Great Black-Backed Gulls all abundant and a few Kittiwakes fishing further out. In addition to these a few familar waders passed by with small numbers of Dunlin, Oystercatcher, Golden Plover and Purple Sandpiper on the move and a good few Sanderling scampering around in the foreground. 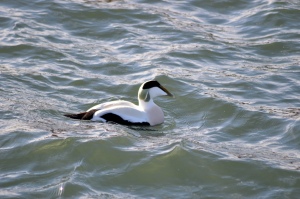 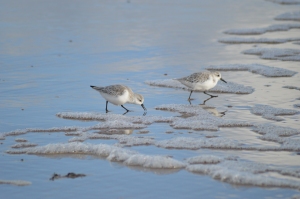 As you can see, not a bad few days here in the cold, desolate North! The more time I spend seawatching, the more I enjoy it and there is plenty time this winter to pick up that patch first Red-Necked Grebe or white-winged gull. Hopefully both will come in January when I enter the Blyth Estuary (and the nearby coastline) into the ‘Coastal North’ league of the Patchwork Challenge. Not expecting any miracles here but with birds like those mentioned above, I should certainly wrack up a few more points than I ever did patching the reclaimed Opencast at Stobswood.